643 Words About Inferentialism, Disquotationalism, the Tonk Problem and the Liar Paradox

A popular view about the semantic function of the truth predicate is that "truth is disquotation." A classic explanation of this comes from Quine, who claims in a famous passage in "Philosophy of Logic" that the semantic effect of appending "is true" to a quoted sentence is to cancel out the quotation marks. Thus, when we say "'Snow is white' is true", we're not talking about the sentence and attributing some property to it--e.g. correspondence or coherence or whatever. Instead, we're talking about snow and attributing whiteness to it. (Of course, in that example, asserting that snow is white in this indirect way is just redundant, but there are plenty of familiar contexts--e.g. "blind endorsements" like Jack saying "everything Jill just said is true" when he can't necessarily remember every detail of what she said--in which having the truth predicate in our language does allow us to say things we couldn't say without it.)

A lot of people who call themselves disquotationalists don't spell out exactly what they mean by 'disquotationalism', preferring to leave it at a rough intuitive level, and I'm pretty sure quite a few pretty much what Quine did, but a lot of others (like, e.g. JC Beall) make it clear that they mean something slightly different. They start with something like inferentialism about logical connectives--the view that the meaning of the connectives is defined by the logical rules governing them--and apply this to the truth predicate, such that the rules allowing one to derive "'P' is true" from "P" and vice versa are taken to somehow "define" the term "true."

We can think of the first version as "meaning-equivalence disquotationalism" and the second version as "inferentialist disquotationalism." I argued in my dissertation that meaning-equivalence disquotationism gives us a good, principled non-ad-hoc reason to think that sentences like "This sentence is true" and, crucially, its paradoxical cousin "This sentence is not true" are meaningless. After all, if "is true" doesn't add any semantic content to a sentence--and a sentence like "this sentence is true" has nowhere else to gets its content--it ends up just not having any.

But what about inferentialist disquotationalism?

This problem has been around forever, and while some people--and I'm one of them--take it to render inferentialism painfully implausible, clearly, lots of inferentialists are willing to live with it. "Living with it" clearly means imposing some sort of restrictions on which sorts of rules can create meanings. The phrase "well-defined" is often muttered at this juncture.

....which is fine. (Again, not my preferred way of going about things--especially since making those sorts of moves makes it impossible to have a non-question-begging argument with someone who questions those basic logical assumptions--but, for present purposes, let's say that it's fine.) But, if we can just see the logical implications of allowing some connective and declare it logically impossible that it's meaningful, why can't we do the same thing with sentences? If inferentialism works, it's because we can impose a logical-possibility constraint on meaningfulness, and if we can do that, it looks to me like we have an even quicker way of getting to the meaninglessness conclusion about paradoxical sentences than we did with meaning-equivalence disquotationalism.
Posted by Ben at 12:01 AM 3 comments:

I just got a one-year full-time Lectureship in the Philosophy Department at the University of Miami. Among other things, the new job means that I'll have a lot more time to work on papers, and, as always, this blog is a useful way of kicking around the initial half-baked versions of paper ideas and getting people's thoughts about them. I've already written and scheduled a post for Wednesday called "643 Words About Inferentialism, Disquotationalism, the Tonk Problem and the Liar Paradox." (It's been a while since I've posted here, so I thought I shouldn't skimp on the content when I started back...) Meanwhile, here's a picture of the job-offer paperwork I just signed.... 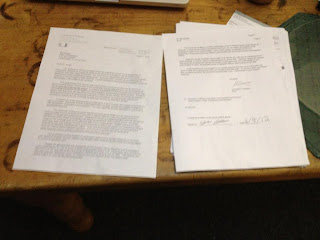